As a musician, when I first heard about the potential candidacy of Beto O’Rourke for U.S. President, I was intrigued. Here’s a former punk rocker who has a viable chance of becoming the next leader of the Free World.

So the first thing I did was to check out the music of his former band “Foss”:

OK, so maybe Beto and Foss didn’t have a high-level of innate musical talent, but as you can see from the first video, the enthusiasm was certainly there.

O’Rourke and his wife, Amy, an educator nine years his junior, both describe the moment they first witnessed the power of O’Rourke’s gift. It was in Houston, the third stop on O’Rourke’s two-year Senate campaign against Ted Cruz. “Every seat was taken, every wall, every space in the room was filled with probably a thousand people,” recalls Amy O’Rourke. “You could feel the floor moving almost. It was not totally clear that Beto was what everybody was looking for, but just like that people were so ready for something. So that was totally shocking. I mean, like, took-my-breath-away shocking.”

For O’Rourke, what followed was a near-mystical experience. “I don’t ever prepare a speech,” he says. “I don’t write out what I’m going to say. I remember driving to that, I was, like, ‘What do I say? Maybe I’ll just introduce myself. I’ll take questions.’ I got in there, and I don’t know if it’s a speech or not, but it felt amazing. Because every word was pulled out of me. Like, by some greater force, which was just the people there. Everything that I said, I was, like, watching myself, being like, How am I saying this stuff? Where is this coming from?

OK, so this guy appears to the Second Coming – the Christlike figure who will beat the Orange Cheeto Monster in 2020.

Intrigued, I went to his campaign website at www.betoorourke.com to review his campaign platform. As far as I could see, there isn’t a policy platform on his site (as of this writing), which I found strange. Contrast this to the website of other Democratic candidates such as Elizabeth Warren or Andrew Yang who highlight the issues they’re campaigning on.

When I did an internet search to find out what Beto’s policy platform actually was, I found and read this Washington Post interview with him which highlighted his lack of policy specifics:

EL PASO — In a digital ad that recently went viral, Beto O’Rourke tore into President Trump’s desired border wall with soaring footage of the Rio Grande Valley and an explanation of what the wall would do: cut off access to the river, shrink the size of the United States and force the seizure of privately held land.

It noted that most undocumented immigrants who arrived in the United States in the past decade came not over the border but on visas that then expired.

So what should be done to address visa overstays?

“I don’t know,” O’Rourke said, pausing in a lengthy interview

O’Rourke’s approach reflects how he is likely to handle issues should he launch a presidential campaign. Beyond a few mainstream Democratic stances — including closing private immigration prisons, allowing undocumented immigrants to become citizens and modernizing the work visa system — O’Rourke insists the thorny immigration answers will come from everyday Americans. It’s an approach that puts off specifics that might define him or narrow his appeal in a presidential race — but O’Rourke says he is being open-minded, as he wishes more politicians would be.

After reading this interview, I was reminded of an episode of WKRP in Cincinnati which Beto seems to have viewed and taken to heart:

“The secret is to appear to answer all the questions when in truth it’s all mumbo jumbo.”

What I’ve learned about Beto up to his point –  he spent his twenties in a punk rock band and studied English in New York City, after which he worked as a live-in nanny. He returned home to El Paso Texas and co-founded a web-design company, became a city councillor in El Paso, became a Congressman and lost a Senate race with Ted Cruz. Beto’s had an interesting life, but nothing extraordinary.

And he never gives a straight answer when asked about important policy issues. I started to ask myself: “why is the American mainstream media giving this guy such flattering coverage? What’s their angle”? 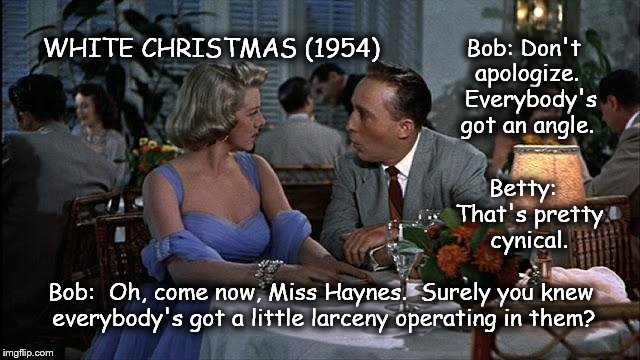 I did a little more digging to try to answer this question. I found this really interesting discussion about Beto at the Real News Network, from which I’m going to excerpt and highlight:

This Beto O’Rourke candidacy is kind of interesting. He raised a lot of money. He raised actually more than Bernie did. Bernie raised $5.9 million from 220,000 donors. Beto raised $6.1 [million] from 128,000 donors. So clearly Beto had some bigger donors in there. We don’t know exactly who they are…

…the fact is that when you trace his political history, which only goes back 15 years, he was able to get on to the El Paso City Council with the backing of some powerful and wealthy Republicans in that part of West Texas. And ever since, he’s had an alliance with a fairly conservative GOP funders. And he’s taken positions that, especially on economic issues, often are in sync with the, if I can use this term, mainstream Republican Party.

So I think overall he has a sort of a formula of style which seems independent, maybe edgy, hip, taking some positions, particularly on racial justice, that are appealing to the left. But when you get to bedrock corporate power issues he’s in with Wall Street. And that’s really a very popular combination for corporate media.

…he (Beto) was a member of the National Democratic Coalition. What’s that about, and what does that tell us about Beto?

…it seems to me the critical issue is that it’s not that there’s something in the label of corporate Democrat, or National Democratic Coalition. It’s that the policies didn’t work. Clinton policies, the Obama policies. Inequality got greater. The Rust Belt emerged under Bill Clinton, or certainly much more emerged under Bill Clinton. It’s not them individually. It’s the kind of policies they represent.

This conversation articulated what I’ve come to suspect: Beto the bass player has become a front man – not for his band Foss, but for corporate America.

First, there’s nothing inherently wrong with centrist politics given the right time and place. But with record-income inequality, a record number of suicides among unemployed middle-aged Americans, and impending mass unemployment due to automation, I believe more radical policy changes are required to make the American dream a reality again for all of its citizens. As likeable as he is, I don’t think Beto is the one who’ll deliver this.

Second, the overwhelmingly flattering coverage of Beto by the American mainstream media is so transparent that anyone with half a brain can see it for what it is – they’re shilling for the corporate front man. The other Democratic candidates, many of them women, haven’t received nearly as much coverage as Beto. If Beto does become the Democratic nominee, this could lead to the same outcome in 2020 as what happened in 2016 when the media all but anointed Hillary Clinton as the next U.S. President; a backlash against the Democratic Party by middle America and those it seemingly left behind as well a loss of faith in the objectivity of the mainstream media.

But I’m just a dumb Canadian. What the hell do I know? 😉

There was an error retrieving images from Instagram. An attempt will be remade in a few minutes.